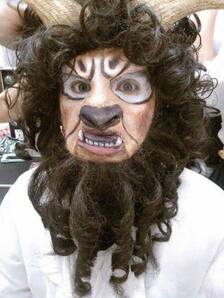 Brady Love has been fortunate to have played many leading roles across his career in theatre. His first experience onstage was when he played The Scarecrow in "The Wizard of Oz" in the 6th grade, followed by The Peddler in "Oklahoma!" the following year.

When he hit high school, he was cast as radio personality Bert Healy in "Annie" in 2012. His performance impressed his high school teacher so much that he cast him as The Beast the following year in Disney's "Beauty and the Beast".

Immediately after graduating from high school, Brady picked up his first paid, professional acting job playing his dream role, Javert in "Les Misérables" with Way Off Broadway Dinner Theatre in Maryland. He performed the role from June-August of 2014.
On April 14, 2019 Brady once again sang the role of Judas in "Jesus Christ Superstar". In July-August 2019, Brady returned to "Jesus Christ Superstar" once more with Northampton Community College, this time as Pontius Pilate.
Following "Jesus Christ Superstar", Brady decided to take a much deserved (and much needed) break from any and all theatrical work. The timing of this couldn't have been better, as just 6 months afterward the COVID-19 pandemic began and caused a complete shut down of any and all productions.

This gave Brady time to heal from the development of nodules on his vocal cords. After suffering great difficulty singing through out October-January, Brady rushed to a specialist and discovered the growths in the early stages. Thankfully, they were caught early enough that treatment simply required voice rest. Within months Brady made a full recovery and was able to continue on with some personal music projects.

One such project included the launch of a YouTube channel dedicated solely to his recordings, and footage from his live performances. The channel has grown slowly but steadily in popularity since it's launch in April of 2020, and Brady updates it regularly.

It was on this channel that Brady briefly gained a significant amount of attention during the summer of 2021. It was at this time an internet meme of people doing impressions of musical artists singing the lyrics of the song "Low" (or as it became known, "Apple Bottom Jeans") set to one of their hits was hitting it's peak. Seeing an opportunity, Brady created his own version of the meme, doing an impression of Luciano Pavarotti singing the lyrics set to the aria "Nessun Dorma". Soon after the video took off, and resulted in many people taking a look at Brady's other work and becoming fans. To date the video has 1.6 million views.
In April of 2022, Brady performed his first gigs with the band, singing in public for the first time since August of 2019. He is proud of his work and his current vocal abilities, and considers this to be one of his greatest, if not the greatest, achievements of his entire singing career.

In addition to his theatrical work, through the years Brady could be seen frequently performing concerts for retirement communities frequently appearing in local Pennsylvania cabarets. He sings classic Broadway hits as well as his favorite genre of music, Jazz/Great American Songbook standards.

Brady also frequently records music. At times, these will be compiled into a collection that is made available to download on his Bandcamp page. Some of these projects included a collection of his favorite songs from Broadway and theatre titled "This is the Moment", originally released in April of 2017, and later re-released with new vocals in June of 2020. Physical CD copies were sold at performances of "Beauty and the Beast" and "Jekyll & Hyde" in 2018, as well as his concert appearances. All copies have been sold out!

Perhaps his most prominent collection of music, however, was a compilation of his recordings of Queen songs titled "Champions: A Tribute to Queen". This collection put together recordings made from 2018-2021 encompassing a majority of Queen's hits. The collection has what is considered by some to be Brady's best and most vocally ambitious recordings to date.

Moving forward, Brady intends to continue to sing with "MAL-Practice Showband" for the foreseeable future. He has no current intentions or plans to return to any musical theatre productions, although he remains open to it if the right opportunity comes. Although his busy schedule hasn't allowed for much recording, he will continue to record new music and share footage whenever he is able.
Powered by